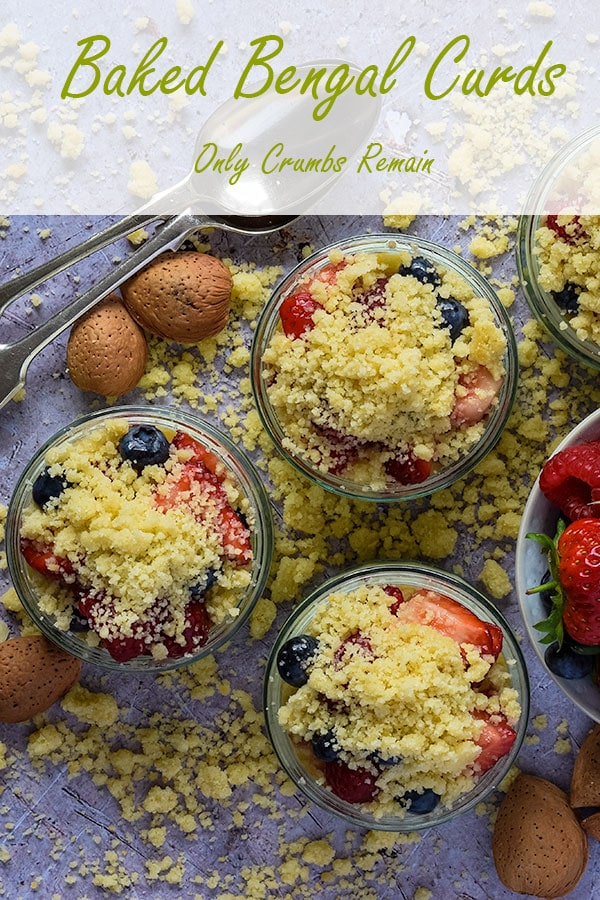 Think of this dessert as an easy baked cheesecake.  With creamy cheesecake like curds, colourful berries and
contrasting texture courtesy of the almond crumble, this traditional Indian dessert of Baked Bengal Curds is certainly one to try.  It is naturally gluten free.

If you’re looking for an easy dessert recipe which is not only tasty but perfect either as a mid-week treat or to serve when entertaining guests then look no further, you’ve found it!

All three elements of this delicious dessert, the curds, almond crumble and macerated berries, require just 10 minutes of hands on time, which includes getting the kitchen scales out of the cupboard and weighing the ingredients, or up to 15 minutes if you’re working particularly slowly!  If that’s not enticement enough just check out how inviting the dessert looks with those beautiful summer berries against the creamy white of the baked curds.  And the piece de resistance, for some, me included, is that this dessert tastes remarkably like cheesecake!

Smooth.  Creamy.  Delicately flavoured.   It’s far quicker to rustle up than a regular baked cheesecake, being baked in ramekins it spends far less time in the oven too.  And of course, as the baked cheesecake is served in individual portions it makes it even more special – or at least in my opinion.

One issue with baked cheesecakes, despite their deliciousness, is that they can easily crack potentially affecting the aesthetic appeal of your dessert.  But this easy cheesecake recipe doesn’t seem to have that issue (or at least the baked surface hasn’t cracked on the numerous occasions that we’ve enjoyed Baked Bengal Curds).

Our first introduction to Baked Bengal Curds, also known as Bhapa Doi, was in an edition of the Metro newspaper.  Being enticed to try it and learn more about this simple yet delicious dessert I called upon our friend Google.

A quick search taught me that this is a traditional Indian dessert which is often served for religious celebrations in the Hindi calendar.  The name Bhapa Doi literally means steamed yogurt, as the dessert can be steamed rather than baked.

It transpires that the dessert, which our western eyes may view as a deconstructed cheesecake, is a fabulous base for carrying other flavours and textures.  Many of the recipes I’ve read on-line incorporate cardamom powder in the curds and some talk of using pineapple extract, though I tend to stick with vanilla.

The dessert is then often finished with some form of fruit and nuts, making it naturally gluten free.  The recipe in the Metro used a little tamarind paste to enliven some mixed berries.  Other cooks have served their traditional Bengal dessert with pomegranate seeds, pistachios, and even sliced kiwi fruits.   Some suggest baking the dessert with a few saffron strands resting on top of the white curds to create a wonderful orange colour giving a beautiful contrast when pistachios are scattered over the top.

So, here’s how to make Baked Bengal Curds with Macerated Berries!

To make the baked cruds

Calories: 409kcal
Tried this recipe?I would love to know how you got on – Tag me on Instagram @OnlyCrumbsRemain or leave me a comment and rate the recipe below.