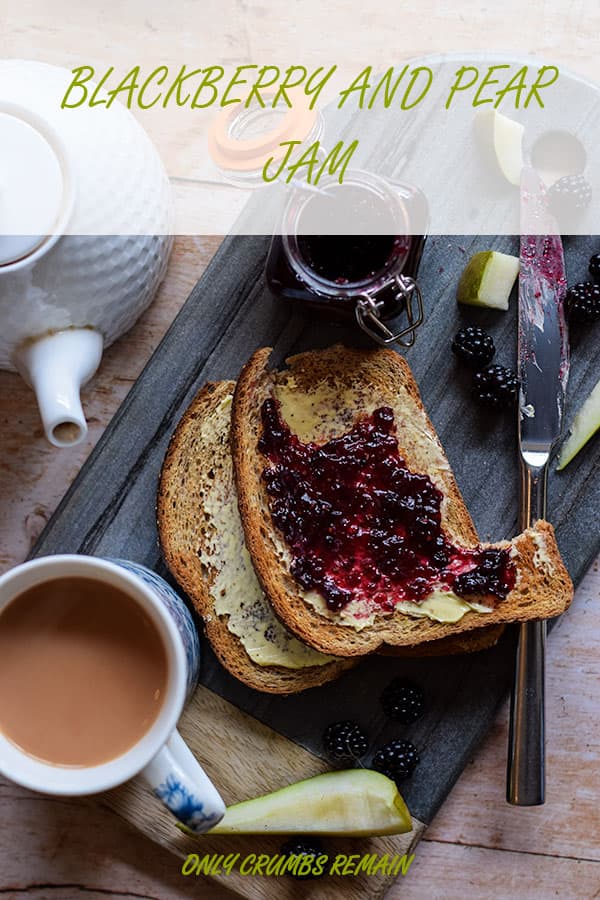 This Blackberry & Pear Jam uses nature’s free bounty to make a tasty preserve for just a few pence.  Not only is homemade jam easy to make and can be used in lots of ways, this blackberry jam recipe uses 25% less sugar than most!

If you’re at all familiar with Only Crumbs Remain, I’m sure you will have noticed that I like nothing more than a spot of baking!  Whether that’s rustling up a few cupcakes, a melt in your mouth pastry, a cookie or two, or even to challenge myself by baking along with the GBBO series, it often means additions like jams, curds and frostings are made to finish a bake.

My Blackberry and Pear Cupcakes are aa fairly simple cupcake filled with a homemade and seasonal blackberry and pear jam, and topped with a delicious mascarpone and white chocolate frosting.

They were so tasty largely because of the fresh fruity taste of the jam.  It seemed such a shame to leave the jam recipe scurried away in the cupcake post, it was certainly crying out for its very own printable recipe!

Of course, this blackberry and pear jam is super yummy in cupcakes, but it’s also amazing in all the other ways that we traditionally use jam:  spread onto toast or in sandwiches may be with a slice of cheese, dolloped into a warm comforting bowl of creamy rice pudding and of course used in other bakes such as jam tarts, swiss rolls or a Victoria Sandwich cake.

The list goes on, but of course it makes a great gift too when presented in a nice jar and perhaps finished with a pretty ribbon and tag!

With the abundance of blackberries in every hedgerow during the autumn, I must encourage you to foraged this delicious fruit when in the Fall. Then use some of the fruit in this blackberry and pear jam.  You won’t regret it!

But if you don’t fancy foraging for your own fruit, you can of course buy it instead. You can also use frozen blackberries in this recipe.

Although it’s incredibly convenient to be able to pop to a local shop to select a ready made jam, it also feels really good and almost virtuous to forage for your own bramble fruits and preserve them in a homemade jam.

Along with a few pears, some sugar, a lemon and a couple of sterilised jars (why not re-use some rather than putting them out in the recycling, though do avoid using those which have previously held tomato based sauces or spicy food as the original aroma will linger even when thoroughly washed) you will have a few jars of delicious fruity jam which costs a fraction of the price of shop bought jam.

Now many of the recipes I’ve seen for blackberry jam use equal quantities of blackberries to sugar.  I’ve tied it with 25% less sugar in this Blackberry and Pear Jam recipe and have found it to work just as well!  It results in a jam with a great set, and a lovely fresh fruity flavour with slightly less refined sugar than most!

So, here’s how to make Homemade Blackberry & Pear Jam!

To sterilise the jars in hot soapy water.  Don’t dry them with a tea towel.  Position them on a tray (for ease of moving them) and place in a warm oven set at 140℃ ( 120℃ fan)/275 F? Gas mark 1 to dry completely.  If you’re using kilner jars, boil the rubber seals as dry heat can damage them.

Avoid re-using jars that have previously contained tomato based sauces or spicy food.  Even when thoroughly washed the original aroma will still linger.
Tried this recipe?I would love to know how you got on – Tag me on Instagram @OnlyCrumbsRemain or leave me a comment and rate the recipe below.